Are you Being Served?

Posted on December 9, 2009 by daviditron 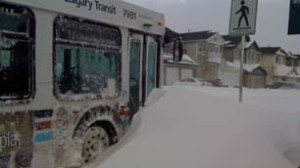 This week Calgary was buried in snow causing major transportation problems. The drifts in some areas were chest deep for several days as they waited for city crews to clean them. It was lucky that no emergency services were required in those areas since neither ambulance nor fire trucks would have been able to penetrate the massive drifts.

Most interesting to me was the news that private citizens can not hire someone to clean the public street for them. I heard one resident who owned a bobcat wishing they could clean their cul de sac but couldn’t because they didn’t want to be fined. In Calgary it is against the law to hire a private firm to clean your street.

Upon first blush this seems like a senseless and dangerous law. It is explained that the reason is to avoid liability issues if private equipment breaks a power pole or knocks off a fire hydrant. Most people begrudgingly accept this rationale as I did, though only for a minute.

Have we become so indentured to our institutions that we imagine that its difficult to hold a person responsible, but an institution can be? A real person with real wealth can’t be held accountable for their actions but the city, which has no wealth of its own is considered a better risk? We mistakenly imagine that the city does have wealth but it does not. Its citizens do but the city does not. We give to the city the rights and obligations of a wealthy and responsible person but it is neither of these things. It seems that the law has flipped the natural order of things much to the dilution of human dignity.

When people prefer to give responsibility to an institution over a person, they can hardly complain when they wake up some day and realize that their institutions no longer serve them.

2 Responses to Are you Being Served?