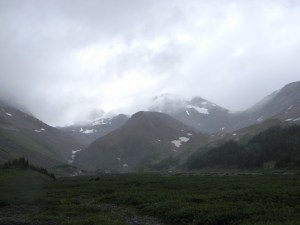 Pictured above in the clouds is Northover, part of the continental divide east of Kananaskis Lake.  It was one of two objectives for what I hope has become an annual trip with Mike.
Day One
Picked Mike up in Calgary and got dropped off at the end of the highway.  After organizing our packs a bit we were off circumscribing the north shore of Upper Kananaskis lake.  I was determined to pack as light as possible as our route involved going up a substantial headwall.  For this reason I had only the clothes on my back plus rain gear in addition to a very lightweight sleeping bag and tent. This weight plus stove, food, water, first aid, etc still makes for a pretty substantial load.  This obsessing over weight came to get me later!
After several kms through trees, we gradually gained elevation and made progress up the valley till the headwall came into view.  I love it when from a distance, you can’t tell how to get up something!  As imposing as it was, when we were right in it, a weakness in the cliff appeared and we had no difficulty other than hauling a big pack up a steep trail.  Off and on rain harassed us in that in between amount where putting a raincoat on is not much better than leaving it off owing to the sweat generated.  I chose to leave my gear on as we were gaining elevation late in the day so getting wet and cold was worse than wet and warm.
By supper we gained our destination, Three Isle Lake.  Upon getting the tent out, the rain opened up with pelting hail.  I managed to not have my rain gear on when it hit so I scrambled to get rain pants and coat on while trying to get our tent up in the hail.  We had it set up when we realized that the water was rising quite fast around the tent. “Should we move it?” we asked ourselves?  After much pondering in the hail, we chose to move it several feet over.
We cooked our food  next to a small grove of scrubby trees. It was the best shelter we could find which was more psychological than physical as it was still quite wet.  While waiting for the water to boil I realized just how wet and cold I’d got.  We ate our slop as it got darker out as I pondered how cold I was going to get tonight.
We ate and got into the tent and I was very aware how much I was shivering.  I began  a horrible process of accessing whether the night was going to be extremely miserable or dangerous. And if it was dangerous, what actions could be taken?  We were a long, long  way from nowhere. I stewed these thoughts over for an hour as I periodically blast heated myself with the stove.  I could tell Mike was not keen to have the stove on in such a small tent.  To tell the truth I only had it on out of desperation but quickly turned it off.  After much thought, I ended up deciding that I was not hypothermic.
I don’t know how much sleep I got but perhaps 2 hours spread out over the next ten hours.  Many times over the course of that night I pictured myself at home weighing my pack and throwing out unnecessary items like extra long underwear and my heavier warmer sleeping bag!  At least I was too cold to feel disappointment that the clouds were going to obscure the Perseid meteor shower we had both been looking forward to.
Day Two
Mike awoke feeling much better than me having brought extra dry clothes.  I can’t describe how energizing it was when while still balled up in the h.e.l.p position, a bowl of warm coffee and oatmeal was passed into the tent!  My pants were colder and wetter owing to the moist air so I donned my Heli-Hanson rain pants over my bare legs and ventured out into the fog and drizzle.
We decided to go for an exploration up Mt Worthington and get our blood moving.  The flowers really were tremendous as we bushwacked our way up the valley.  With no trail, we stopped frequently to confer on the best route up the hanging valley to the Worthington Col. 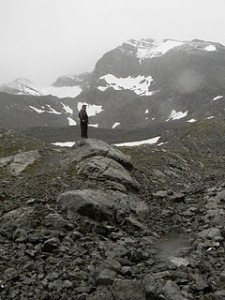 above: Mike at the Worthington Col.
I ventured up the summit ridge by myself for a while while Mike stayed at the col.  I was making good progress feeling invigorated from my newfound body heat generated from climbing.  But the snow was falling quite steadily and the fog started to envelope everything.  When the fog became so thick that I couldn’t see more than a couple feet in front of me, I became very concerned and turned around instantly.  I even had to stop briefly as I couldn’t see where to go at all.  Very uncomfortable feeling being pinned by fog.  Strangely I’ve been stopped like this in winter while on skis but it never feels scary like this did.
The fog broke and I met Mike at the col and we made our way back down to our base camp making attempts to photograph some flowers as we went.  My hands were so cold I had to get Mike to open my granola bar wrapper for me! We got back to camp and made supper in the drizzle and then the sun started to shine through the clouds.  It didn’t stop raining though so we looked rather foolish facing the sun with raincoats off holding wet things out as the rain gently fell on us.  At long last though, at sunset the rain stopped and we dried ourselves out. 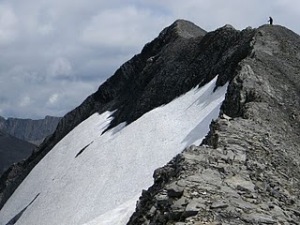 above: Mike on the scary part of the summit ridge.  The ridge is just inches wide. 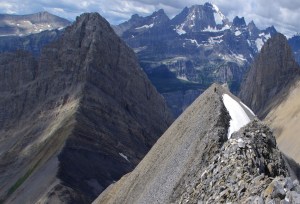 above: Dave is a tiny black dot on Northover with the massive Royal Group behind
Day 3
Woke feeling good so we ate, broke camp and set out for Northover.  Great weather and great terrain.  We gained the top around noonish and soaked in the truly amazing views.  From the 360 degree vantage, the view is more spectacular than the mind can take in.  The precarious ledge overpowers you with a sense of space. It reminds me of the Total Perspective Vortex from Hitch-Hikers Guide to the Galaxy.  When selecting a trip for Mike’s visit, I need to find something that is the right level of challenge.  When he told me that the summit ridge was quite scary, I felt relief! On our way down we found all sorts of fun rock formations to scramble down.  A difficult place to leave as we spied many other good objectives from here.
Back at camp we shouldered our big packs we had left here  and started back.  Returning home from a trip is always slightly somber. The mind processes the accomplishments and the legs begin to fatigue.  The goal is finished and the next thing has yet to form in your mind other than getting home.  Warmth, food, comfort all take on increased value from the everyday.
We arrived at evening back at the highway and put on one last pot of coffee on the cook stove as we watched the sun set on the Opal range.  Suzanne arrived at 8:30 just as we finished the last of the coffee -perfect timing.
Another great trip!
To see on GOOGLE EARTH our route, follow the link to my SPOT page in my links section and click on Northover.

3 Responses to Northover Traverse with Mike